Access to the leading voices in advertising, marketing and media.

How has your mentor supported & elevated your career? 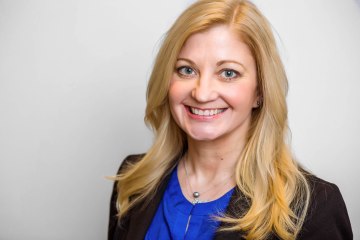 Do you believe people are put in your path for a reason? I do. I’m blessed to have amazing family members, friends and colleagues who have given me sage advice along the way in my career. Mentors have been an incredibly important part of my life.

My first mentor is my mom, Sandra Hudson. Now recently retired, she was a high school English teacher in Pendleton, Indiana, for 27 years. You can imagine how many times my grammar and writing were corrected! She also spent eight years as a high school Assistant Principal and six years as Assistant Superintendent. Her motto? Excellence. Needless to say, that rubbed off. She’s always been supportive in every step of my career, including when I moved to New York and Los Angeles.

Richard Connor, Director of Marketing, was my supervisor at MTV. His father was the President & COO of the American Can Company. Their primary business was making metal cans for beer and soft drink manufacturers, but they also made Welch’s jelly jars, Heinz ketchup bottles and toothpaste tubes. Rich inherited his father’s business acumen, but he didn’t want to work for him. He loved music. Hence, he ended up at MTV. He expected 150% from his team, and we delivered.

Rich kept work/life balance by scuba diving and playing the guitar. He helped support my career by introducing me to the best marketers in the business, then training me and passing the torch so I could work with them directly. Paul Sansone, Director of Marketing at L.A.’s Power 106, was one of those marketers.

Paul Sansone was hands-down, the best of the best. He’s so humble, you’d never know it, but he was instrumental in putting San Diego’s legendary 91X on the air. Paul and I worked on hundreds of promotions, from the MTV Video Music Awards to the Movie Awards, Real World, Road Rules, Spring Break, Unplugged, you name it. I learned a ton working with him and his team at the station. He was always available to answer questions and had a patient, focused, organized approach to event management. We always had a great time working on projects together.

After 12 years of marketing Power 106 as the #1 hip hop radio station in L.A., Paul wanted a new challenge, so he stepped down to start his own production company. He’s had – and still has – an illustrious career, spanning radio, film, TV, concerts and events. If you’re ever at Comic-Con, you’re bound to see him. Look for the coolest experiential project there.

Rich Connor left MTV and moved to Portland, Oregon for a different pace. He became the General Manager of a successful advertising agency, met his wife, and had two beautiful sons. Sadly, he got skin cancer and passed away January 30, 2014. Up until he got sick, Rich continued to provide stellar career advice and, of course, incredible friendship. Rich was hilarious, and he is very much missed. All of us who worked for him remain close friends.

This week, I spoke to Paul and asked him how things were going. Birds chirped in the background of his Southern California home. He chuckled, “Wendy, I’m working on fewer projects these days, but they’re more rewarding. I only work on projects I love.”

I smiled. That’s what it’s really all about – enjoying what you do and working with great people. Paul has always said he’s never chased after the money, that it’s an endless chase, and the satisfaction is not necessarily at the end of the rainbow. He’s right.

*Please Note: All statements are the opinion of the author and may not necessarily represent the views of The ADVERTISING Club of New York.

This site uses Akismet to reduce spam. Learn how your comment data is processed.